Home » I May Not Have Seen Any Cherry Blossoms, But ...

I May Not Have Seen Any Cherry Blossoms, But ... 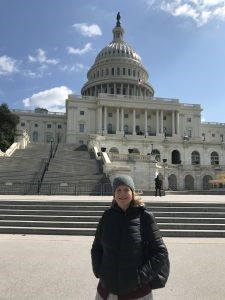 Recently, I had the opportunity to travel to Washington, D.C. wearing my "MPC Director of Advocacy" hat. Unfortunately, the weather was cold and windy and there were no cherry blossoms. However, the trip was excellent. I attended outstanding programs at the United Philanthropy Forum's PolicyWorks Institute and Foundations on the Hill event, got to know my traveling companions, and had very productive meetings with Maine’s congressional delegation and their staff.

PolicyWorks devoted a significant portion of programming to diversity and inclusion. While, gratefully, there’s been a lot of focus on these topics lately, to participate in these programs with many people of color was even more impactful. I congratulate the United Philanthropy Forum not only for its significant growth over the past year, but also for bringing so many people of color to the table. At the PolicyWorks Institute, Candice C. Jones (President and CEO of Public Welfare Foundation) spoke about juvenile justice and advocacy, and Susan Taylor Batten (President and CEO of A Philanthropic Partnership for Black Communities) explored the role that public policy has played in fueling the racial divide. Both were outstanding, inspiring speakers.

A highlight of my week in Washington was hearing from Norah Shapiro—director of the documentary Time for Ilhan—and seeing clips of her film, which follows the 2016 Minneapolis race for State Representative in a district that is home to the nation’s largest Somali population. Ilhan Omar is the first Somali-American, Muslim legislator elected to political office in the United States.

The 2020 Census was also a focus of attention. As a critical source of data, the census is tremendously important. Yet it is already estimated that far fewer people will complete the census in 2020 than in prior years, unless a significant effort is made to promote participation. For the first time, the census will be computer-based and accessed primarily through the internet. At the same time, the financial investment in the census is shrinking.

The census is critical because congressional representation relies on census results, and some funding formulas are also census-based. For example, the following federal programs use census data in determining state funding allocations: Head Start, food stamps, special education, free and reduced lunch programs, WIC, and the Children’s Health Insurance Program. If the federal census under-counts a state's population, it can cost dearly in terms of lost federal funding. For all of these reasons, the Michigan Nonprofit Association has made the census a top priority and provides information about this important issue on its website. 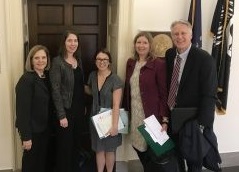 Our delegation to Washington included John Shoos (executive director of the Sam L. Cohen Foundation and chair of the Maine Philanthropy Center's board), Ruta Kadonoff (senior program officer at the Maine Health Access Foundation), Cherie Galyean (director of education initiatives at the Maine Community Foundation), and me. We visited all four of our congressional delegation offices. We were able to join Senators Susan Collins and Angus King and their staff for coffee, and we met with staff representatives from Congresswoman Pingree and Congressman Poliquin’s offices.

In addition to introducing ourselves, we also focused on highlighting the need to protect the Johnson Amendment. Our visit was very timely, given that the Omnibus Spending Bill of 2018 negotiations were happening during our visit. Nonprofits need to continue to be nonpartisan. We know that this issue was one of the outstanding controversies discussed during the final days of the bill negotiations. We’re delighted that the anti-Johnson Amendment rider was not included in the federal omnibus spending bill.

Children on the Hill 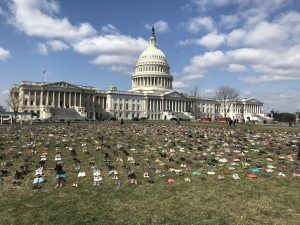 Our visit also coincided with a time of action regarding our children and the need to protect them from gun violence—which we all probably agree is needed. As a lifetime advocate, I found it personally moving to see Washington, D.C.’s youth standing up for their beliefs and taking action. It was also incredibly powerful, and sad, to see 7,000 shoes on the Capitol lawn representing all of the children’s lives lost due to gun shot wounds since Sandy Hook in 2012.

While I did not see any cherry blossoms on my trip to Washington, D.C., the journey was rewarding in many ways. I look forward to building on the connections that I made and continuing to share what I’ve learned. Hopefully, we’ll start to see signs of spring here in Maine before too long.

Lay Down the Heavy Burden of Hate

What we saw yesterday in Washington, D.C. was horrific. While the Capitol seems far from us here in... END_OF_DOCUMENT_TOKEN_TO_BE_REPLACED