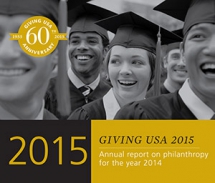 Americans gave an estimated $358.38 billion to charity in 2014, surpassing the peak last seen before the Great Recession, according to the 60th anniversary edition of Giving USA. All four sources that comprise total giving-- individuals; corporations; foundations; and bequests-- upped their 2014 donations, according to the report.

The report is full of interesting information about giving, including the increases in charitable giving by source, which source made the biggest impact, and where those gifts go. The full report, along with a detailed summary, is available on Giving USA's website.

Giving USA is published by Giving USA Foundation, which was established by The Giving Institute to advance philanthropy through research and education. The report is researched and written by the Indiana University Lilly Family School of Philanthropy.